Apple and cinnamon flavored cake, topped with an amazing cinnamon cream cheese frosting and finished off with a caramel apple chip. Oh Em Gee. It could quite possibly be the best cupcake you’ll ever have! 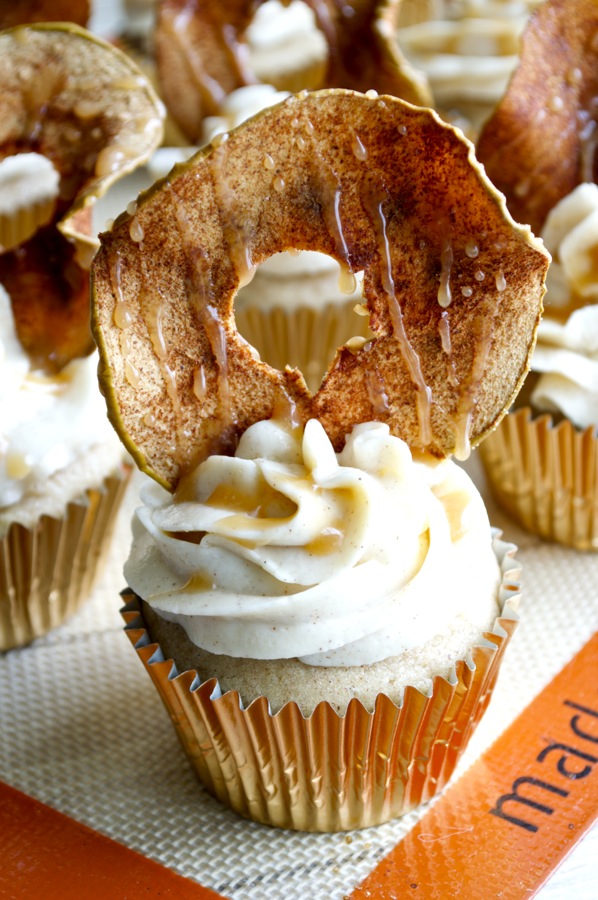 Despite retailers showcasing winter (and Christmas!) merchandise, it is still fall. I had some apples leftover from my trip to the orchard a few weeks ago, and have been itching to make an apple-inspired cupcake. I love caramel sauce and I love apples… but I don’t love caramel apples. Why? Well, for starters I find them difficult to eat – caramel stuck in my teeth? No thanks!

Enter the caramel apple cupcake. It combines caramel and apples in the best way possible! Seriously, this is one of the best cupcakes I’ve ever made. 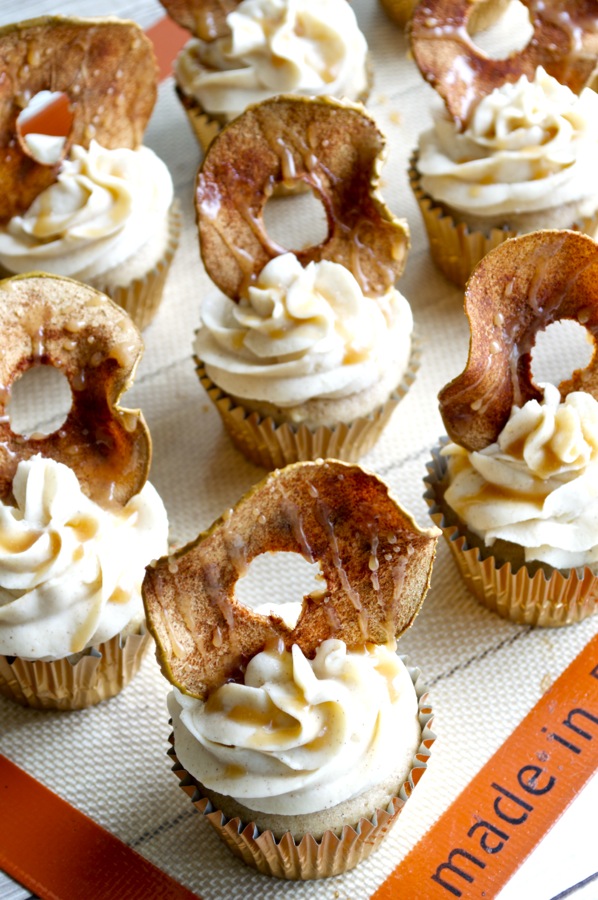 When you look over the recipe, you’ll notice there are a lot of components to this one. Don’t let that stop you from making these. None of the steps are hard… with a little planning ahead you will be on your way to a fabulous fall cupcake!

Starting with the cake batter… I decided to use a yellow cake as the base (my great-grandmother’s recipe!). To the batter I add a fresh granny smith apple and some cinnamon… because what are apples without cinnamon? The batter will be slightly runny, which is what you want – the lighter the batter, the better the rise. This means you’ll have nice fluffy cupcakes with beautiful rounded tops! 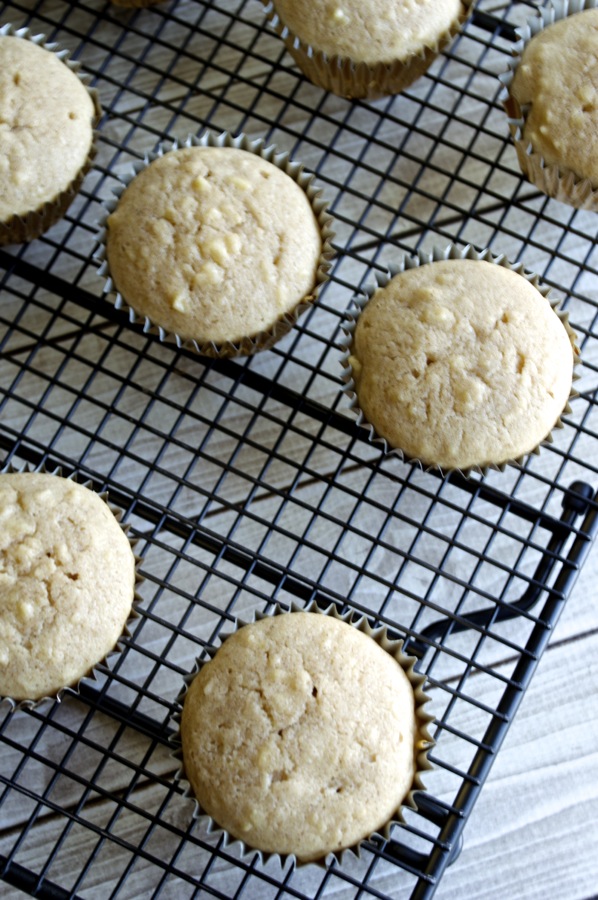 While your cupcakes are cooling you can get to work on the rest of the components! I like to do that apple chips next as they take a little while. They are really easy and really delicious!

All you have to do is slice up a granny smith apple – it helps to have a slicer here so that you get even slices. However, I used a knife and they turned out just fine. I will admit that I did mess up a few, though! Just take your time, or get a slicer!

Next, lay them out on a baking sheet coated with parchment paper or a nonstick silicone mat. Sprinkle them with cinnamon and sugar on both sides and then bake low and slow for about 2-3 hours. They will crisp up and get nice and chewy. I like using a granny smith for these because they are tart, so they balance well with the cinnamon/sugar and the caramel sauce that you’ll be drizzling over them later! 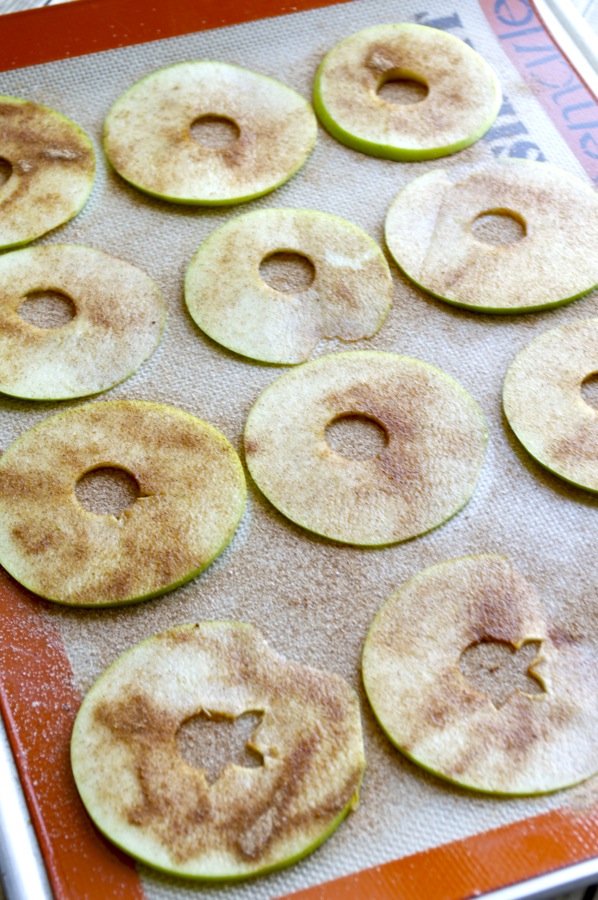 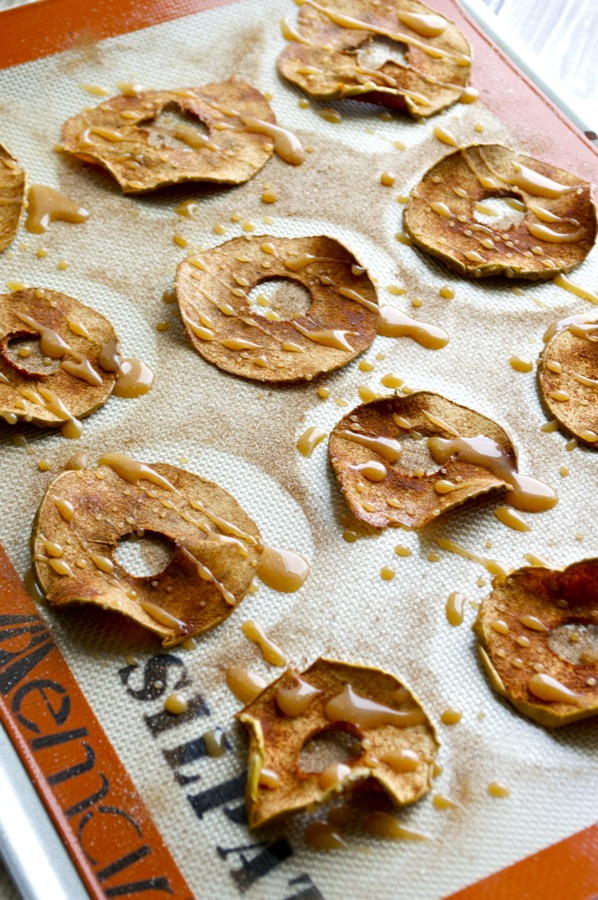 While you’re apple chips are baking, you can make the caramel sauce and the frosting. I make these simultaneously because I’m big on multi-tasking. However, if you’ve never made caramel sauce before I recommend you focus on that – it’s easy to burn if you aren’t paying attention.

To make caramel sauce all you need are 3 ingredients – sugar, water, and heavy cream. Boil the water and sugar together until it’s golden brown in color – this usually takes about 8-10 minutes. Remove the pot from the heat and carefully add the heavy cream. The sauce will bubble and rise up, but keep stirring until it’s fully incorporated and you have a nice, smooth sauce. 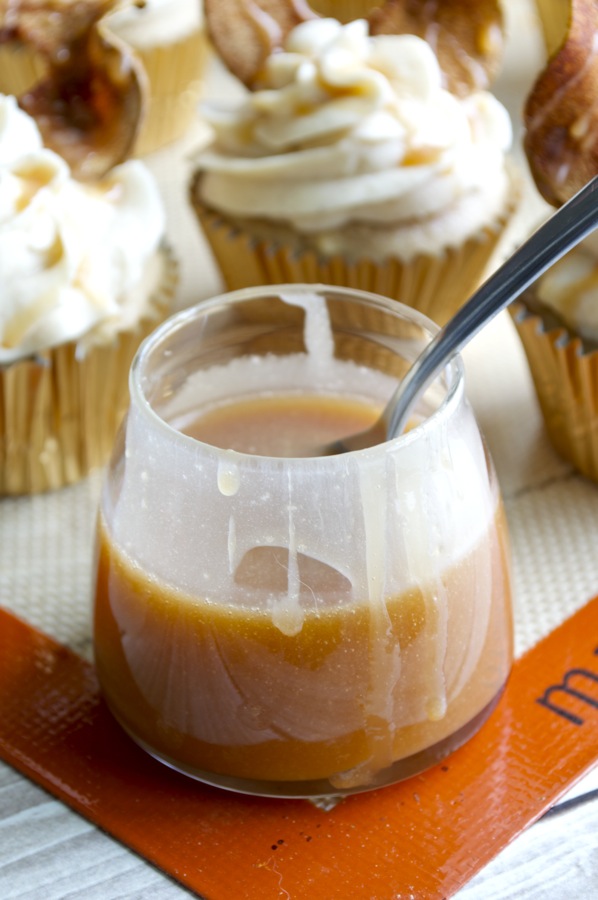 The cream cheese frosting is easy and the best you’ll ever have. Seriously. This version is flavored with cinnamon and it is a match made in heaven for the apple cupcakes. 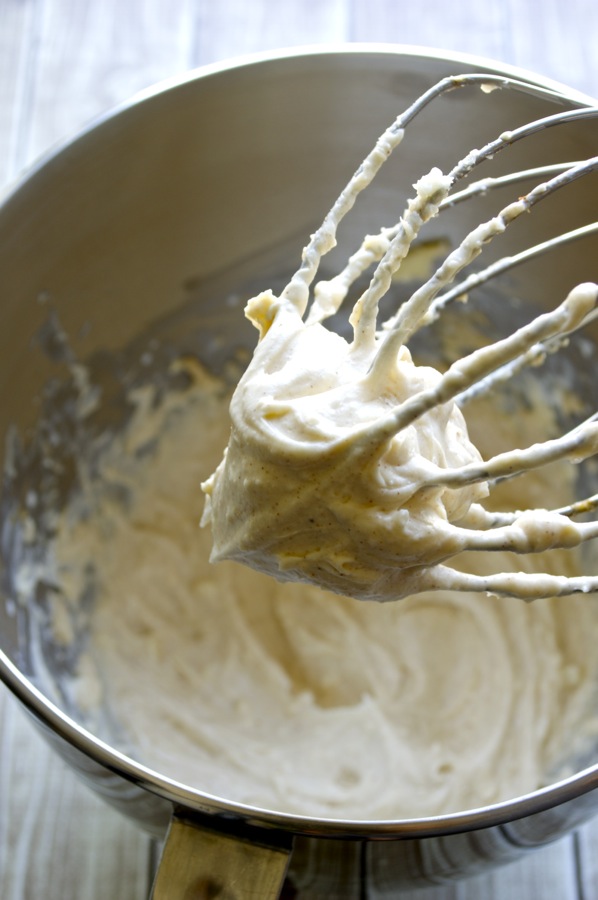 These cupcakes are relatively quick and easy to make; the caramel sauce and apple chips are a bit more work, but completely worth it. I like to make all of the components a day ahead of time and then assemble the cupcakes the next day. I find they come together much better this way and I end up with less of a mess in my kitchen! 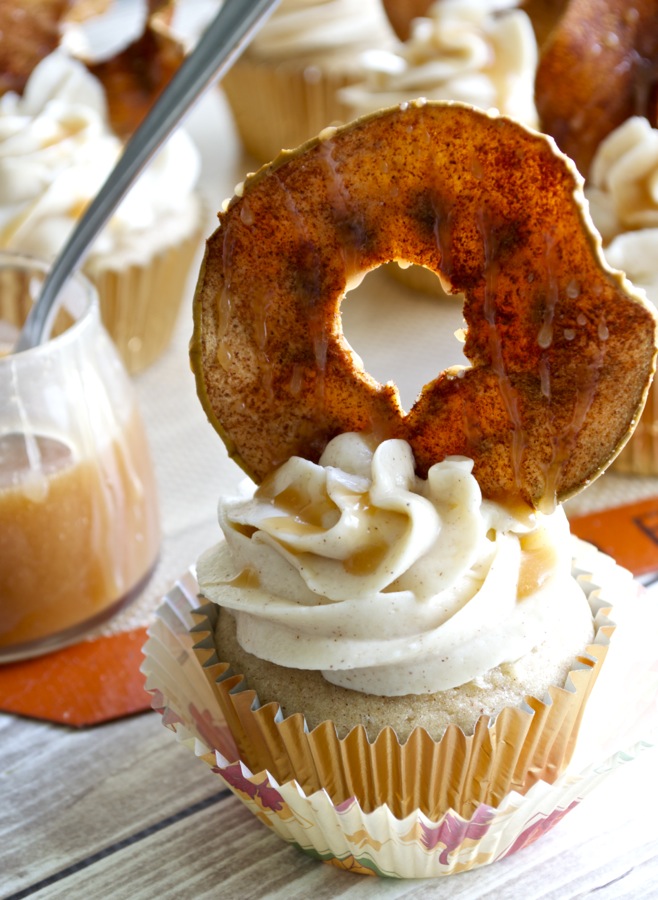 If you’ve never made homemade caramel sauce, you have to give it a try – the flavor is unbelievable and the leftover is great for drizzling on other desserts and ice cream. Same goes for the apple chips – yes they take a few hours to bake, but they are SO easy!

Of course you could just buy a jar of good caramel sauce and some apple chips, but where is the fun in that?

I hope you are still enjoying the fall season and will give these cupcakes a try! 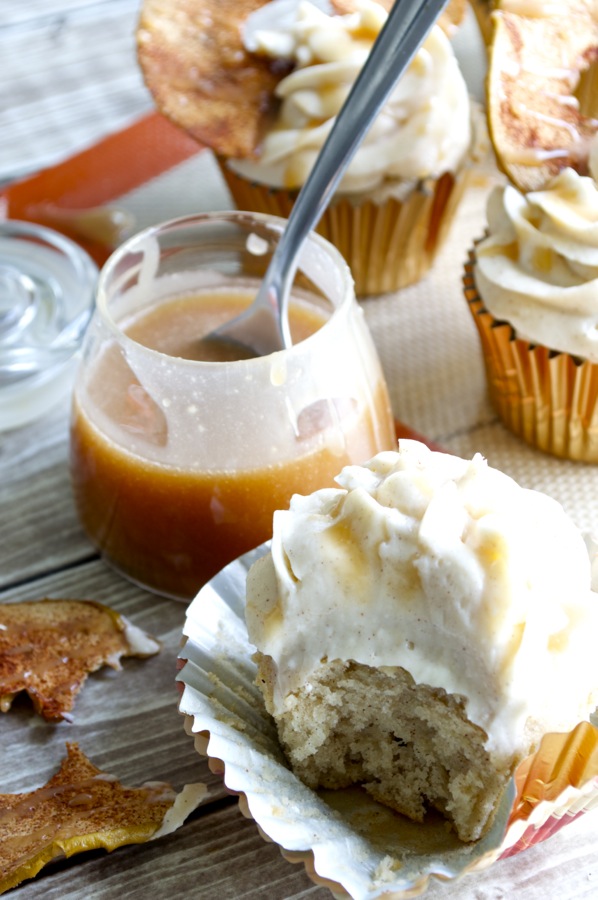 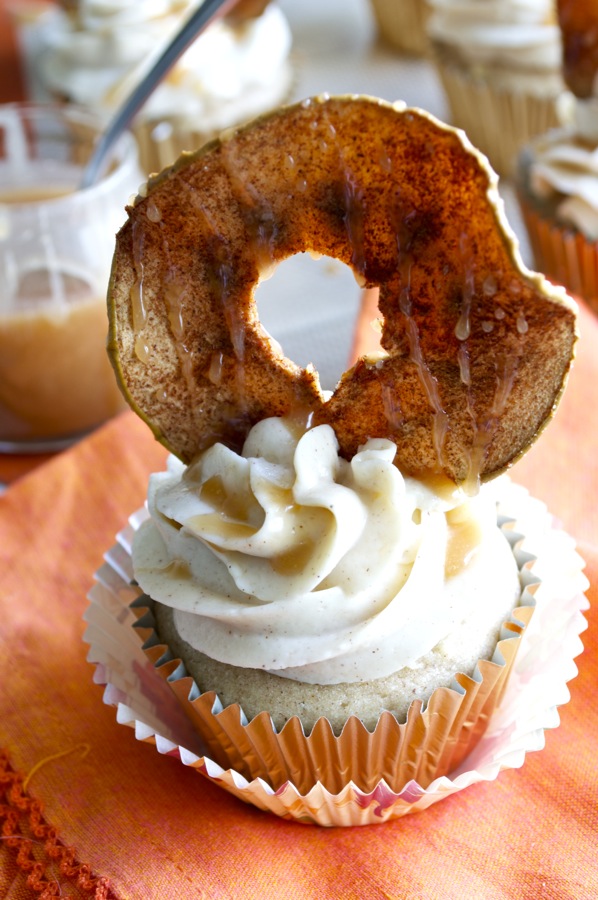 For the Caramel Sauce:

For the apple chips:

Preheat the oven to 350º and line a standard muffin pan with cupcake liners. Combine the flour, baking powder, salt, and cinnamon in a medium bowl.

Combine the sugar, water, and cubed apple in a medium sauce pan. Bring the mixture to a boil and cook for about 3 minutes, or until the apple starts to soften. Let the apple mixture cool and then pour it into a food processor and pulse a few times until the apple pieces are finely chopped, but not completely pureed.

In the bowl of a stand mixer fitted with the paddle attachment, combine the butter and the apple/sugar mixture and mix well. Add in the egg and vanilla and mix well. Begin adding in the dry ingredients, alternating with the milk until incorporated. Fill the cupcake liners almost all of the way full; bake for 18-20 minutes or until a cake tester inserted in the center comes out clean. Once cakes are cool frost the cupcakes, drizzle with cooled caramel sauce and top with an apple chip.

In the bowl of a stand mixer fitted with the whisk attachment, cream together the cream cheese and butter until light and fluffy. Add in the powdered sugar, cinnamon, and salt; mix until well incorporated. Add in the heavy cream and whip on medium/high speed until fluffy consistency is achieved. Refrigerate frosting for about an hour or until firm before using.

For the caramel sauce:

Melt the sugar and water over medium high heat. Continue to cook, watching carefully, until it turns a deep golden brown; about 8-10 minutes. Remove from heat, and slowly add the heavy cream – be very careful as the cream will spatter and foam up, but keep mixing and it will subside. Let the caramel sauce cool before using.

For the apple chips:

Preheat oven to 200º. Mix together the cinnamon and sugar (you don’t need to use all of it). Lay sliced apples in an even layer on a parchment covered baking sheet and sprinkle lightly with cinnamon-sugar, making sure to coat both sides. Bake for 2 1/2-3 hours, flipping the apples halfway through until they are lightly browned around the edges. The apples will crisp more as they cool.

*The cream cheese and butter should be just soft enough to mix. You don’t want them to be at room temperature or warm, otherwise when you add the cold heavy cream it will cause the cream cheese/butter to ball up.