Nothing is more comforting than a slow-cooked, tender pot roast. This slow cooker Paleo pot roast is extra special because it’s good for you, but doesn’t sacrifice any flavor! Using bone broth as the cooking liquid gives the sauce unbelievable flavor! 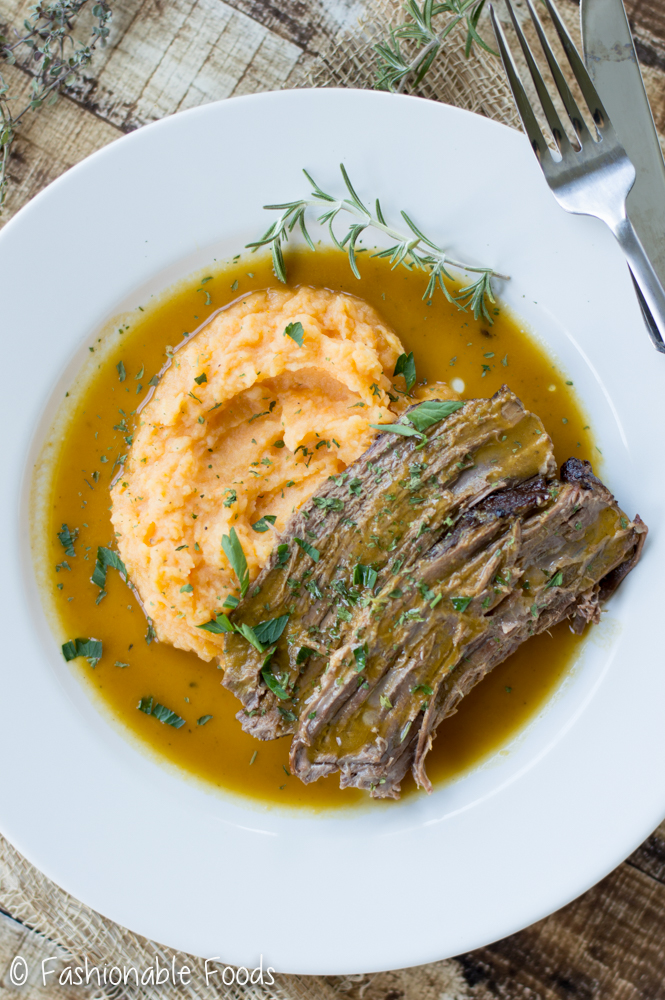 Hi friends! How is your week going? This week seems to be flying by for me. It seems every time I have a million things to do, the week passes by in the blink of an eye! It’s good to be busy, though. Anyone else with me on that one?

I’m pretty excited for the weekend, so I won’t complain that the week is going so fast. Kyle and I are headed home to visit our parents and attend our 10 year high school reunion. That sounds so crazy – 10 years?! It’s unbelievable that we have been out of high school for 10 years now.

I don’t know about you, but I love me some pot roast. It’s just SO comforting and warms you up from the inside out. However, traditional pot roast tends to make me feel pretty blah after I eat it. Partly from overeating and partly from the butter-flour gravy and mountains of cream-and-butter loaded mashed potatoes. Not that there’s anything wrong with that from time to time!

BUT, what if I told you that you could have the same comforting pot roast, but much healthier that actually makes you feel good after eating it?

I’m sure you’re on the edge of your seat here.

Well, you totally CAN and should have that same comforting pot roast, but Paleo-fied. 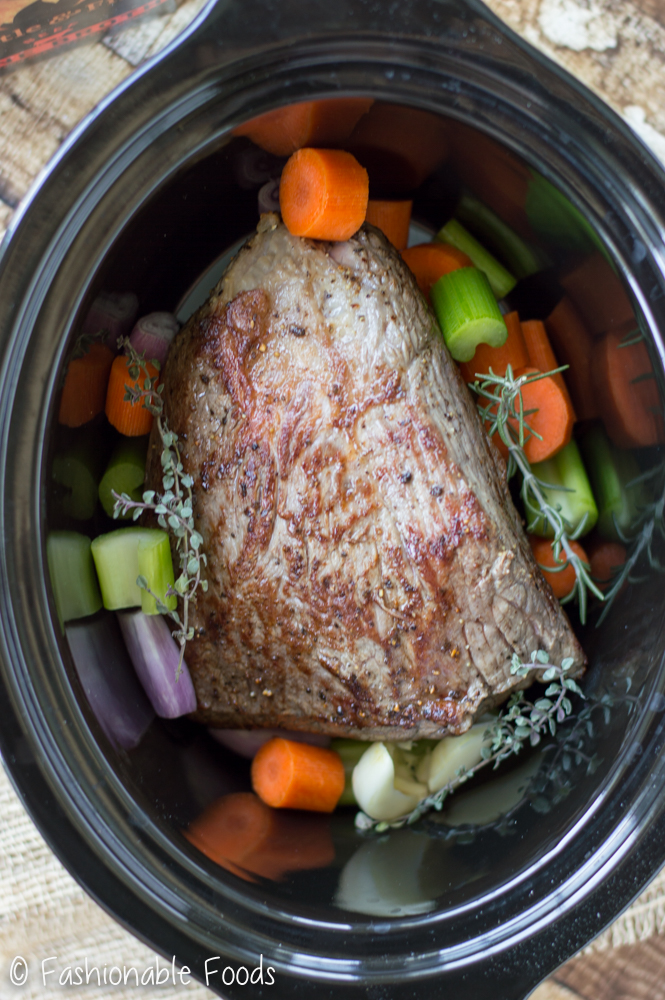 How does a Paleo pot roast differ from a regular? Well, there’s only a few differences.

Difference number one is the cooking liquid. Typically we use water or beef broth for cooking pot roast, but in this recipe I’m using bone broth. If you aren’t familiar with bone broth, it’s basically like stock, but much more nutrient rich. It’s made by cooking marrow-rich bones for a very long time. This draws out all of the nutrients making for a rich, good-for-you broth perfect for drinking straight or using in recipes!

You can buy bone broth or try your hand at making your own, either way it’s going to be delicious! My favorite bone broth is from Kettle & Fire! 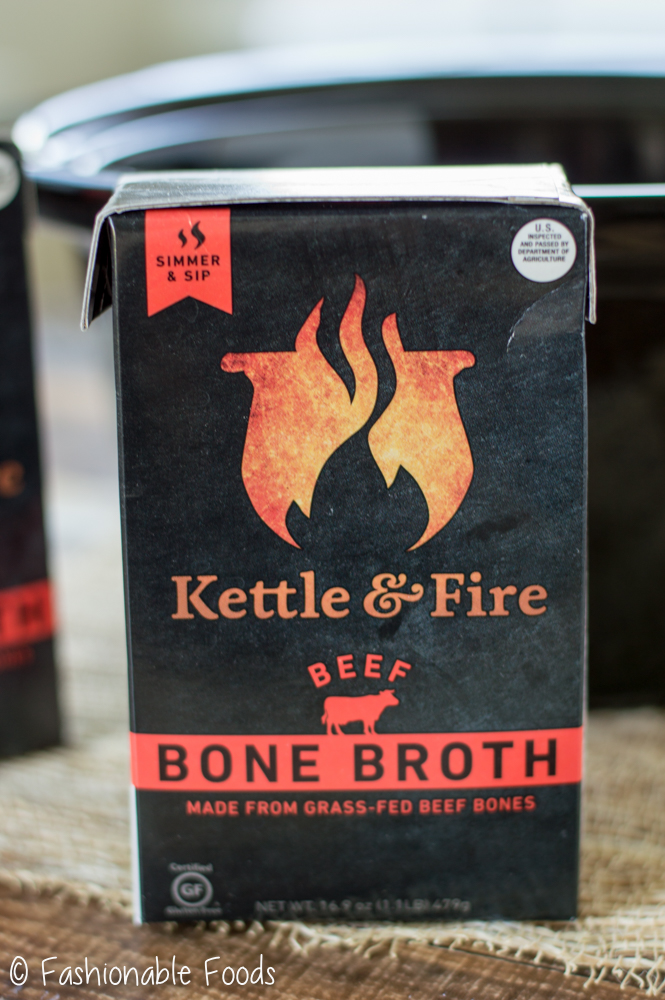 The next difference in this paleo pot roast is the gravy. I loooooove me some gravy. When eating Paleo, though, grains are a no-no. So, how does one make gravy? With vegetables as a thickener!

This is one of my favorite tricks any time I make gravy – Paleo or not! All you have to do is blend up your bone broth with the cooked vegetables. Once your roast is falling apart and ready to eat, simply remove it from the slow cooker and then blend up the bone broth and veggies. Instant gravy!

The last difference for this post roast is the side dish. I always need mashed potatoes alongside my pot roast. Typically that means white potatoes loaded with dairy. And tons of butter. Obviously that’s a no-no for a Paleo lifestyle! Instead we use sweet potatoes that are mashed with chicken stock and drizzled with ghee or olive oil. Simple and delicious mashed sweet potatoes that pair perfectly with our roast and nutrient-dense gravy! 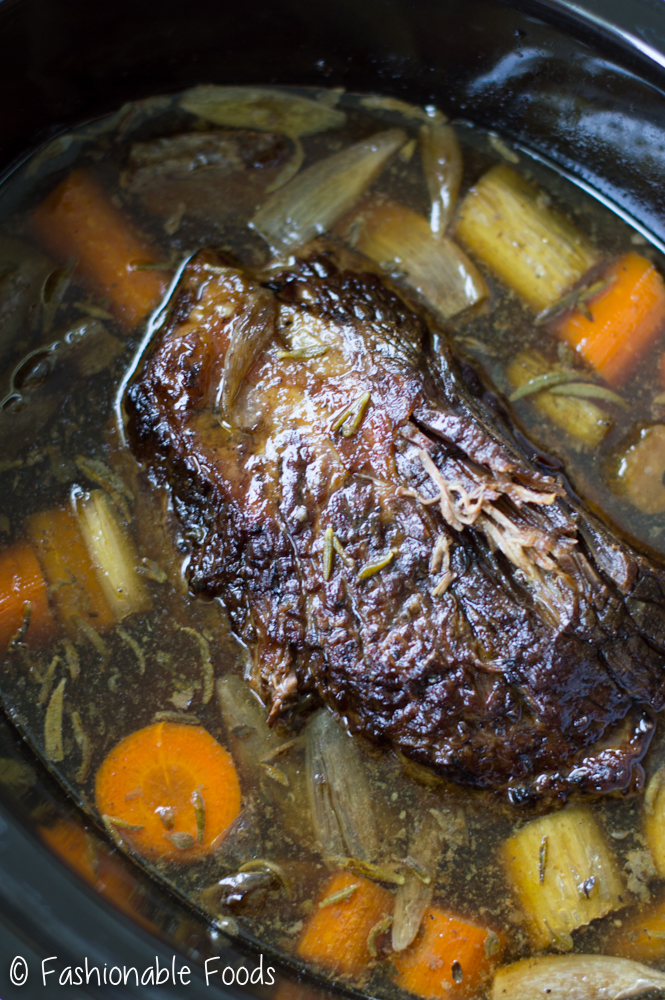 Guys, this is simple good-for-your-soul type of food. Not only do you feel fantastic after eating it, but it tastes just as good (actually better) as a traditional pot roast!

Kyle always wrinkles his nose at the sound of pot roast (I know, he’s crazy), but he really enjoyed this one. Not only did he love it the first time around, but he requested the leftovers for his lunch the next day!

Go grab yourself some bone broth and make this pot roast – I promise you’re going to love it! 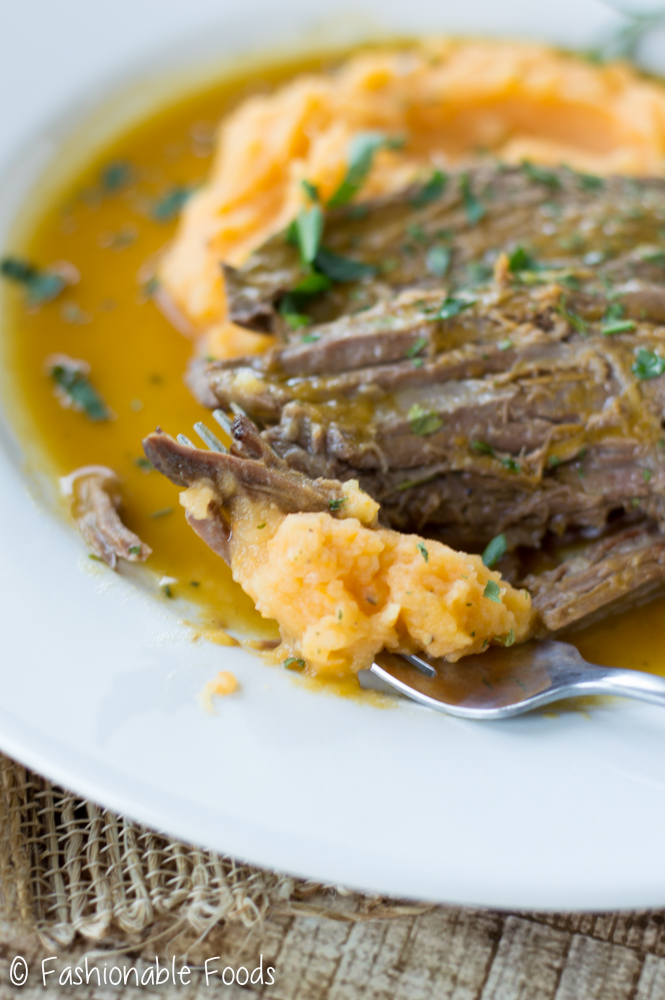 For more info on what bone broth is and the benefits, check out this blog post.

If you’d like to try making your own bone broth, check out this video! 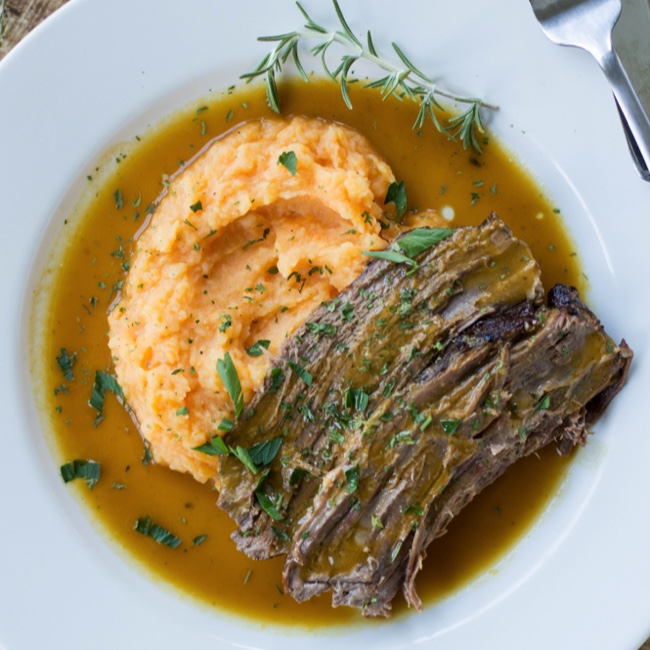